Peek Inside a Book - Meg

When I was deciding to come back to the blog I was looking through all the blogging memes that the blogs I read follow. I had done Book Beginnings and The Friday 56 a handful of times, but over at Mixed Book Bag, JC merged them together and I really like that idea.  So borrowing from her I'm going to start linking up to both Book Beginnings on Friday from Rose City Reader and The Friday 56 with Freda's Voice. 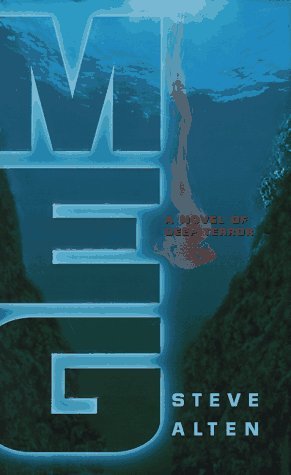 From the moment the early morning fog had begun to lift, they sensed they were being watched.

On Page 56:
As the helicopter approached the aft deck, Jonas immediately recognized the large reinforced-steel winch attached to the ship's transom which had been used to lower the twenty-five UNIS submersibles to the bottom of the Mariana Trench.

Verdict:
I wanted to read this since it was the basis of the movie The Meg starring Jason Statham.  It was a really good read and it is the first in a series. I don't know if I'll read more books but now I can't wait to watch the movie and compare the two.

Popular posts from this blog

Blind Date with a Book

February 07, 2012
Last year I put together a book display called Blind Date with a Book.  I found the idea through another librarian's post and thought it was great.  Last year I wrapped 19 books and 15 books were checked out.  We asked that people reviewed the book but unfortunately only two people returned reviews.
Last year's books included:

In the Hot Zone by Kevin SitesNight by Elie WieselTom Clancy's Ghost Recon by Daivd MichaelsMacbeth by ShakespearA Million Little Pieces by James FreyWolf Hall by Hilary MantelAn Inconvenient Truth by Al GoreUnder the Dome by Stephen KingLawless by Nora RobertsThe Sinatra Files by Tom KuntzThe Help by Kathryn StockettThe Dante Club by Matthew PearlFord County by John GrishamThe Elegance of the Hedgehog by Muriel BarberyThe Postmistress by Sarah BlakeA Beautiful Mind by Sylvia NasarHide & Seek by James PattersonA Vintage Affair by Isabel WolfGorgeous East by Robert Girardi Most of these books were ones that I either had read or wanted to read. But…
3 comments
Read more

Went to the 2013 NJLA Adult Services Forum...left with a book list.

October 29, 2013
Yesterday I attended the NJLA Adult Services Forum (don't worry you don't need to know what it is for this post) and while there attended one panel and spoke on another and walked away with a list of some new books to read.  Since I'm really behind in writing reviews I decided to just share these new books so I at least had a post for today!

I Love This Bar by Carolyn Brown

Title:How to Walk Away
Author: Katherine Center
My rating:4 of 5 stars
Date Started: Date
Goodreads Summary:
Margaret Jacobsen has a bright future ahead of her: a fiancé she adores, her dream job, and the promise of a picture-perfect life just around the corner. Then, suddenly, on what should have been one of the happiest days of her life, everything she worked for is taken away in one tumultuous moment.

In the hospital and forced to face the possibility that nothing will ever be the same again, Margaret must figure out how to move forward on her own terms while facing long-held family secrets, devastating heartbreak, and the idea that love might find her in the last place she would ever expect.


Little Thoughts: I finished this book this morning. It was a really fast read and a bit predictable, but it was the light read I needed right now!